The Annual Audit Observation Report 2016 meeting was chaired by Hon’ble Secretary MoAF, and conducted at ARDC, Bajo on 19th July, 2017 to discuss on annual report 2016 observation of audit memos pertaining to memos pertaining to RNR sectors of West-Central Region. Honourable Secretary and his entourage was accompanied by Dasho Rabgay Tobden Director, Directorate Services, Mr. Letho Wangchuk, Internal Audit Unit, Madam Dechen Choden AFD, MoAF and other imminent  officials of the Ministry of Agriculture and Forests, Thimphu. The Program Directors of ARDC, Samtenling and Bajo, Chief Forrest Officers of Divisional Forest Office, Lobesa and Dagapella and Park Manager, JDNP along with Finance personnel were present in the meeting. The meeting finally resolved with an advice by the Hon’ble Secretary to the agencies to finalize and submit the report on or before September 15, 2017 with outfail. 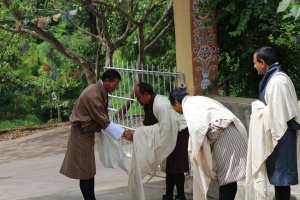 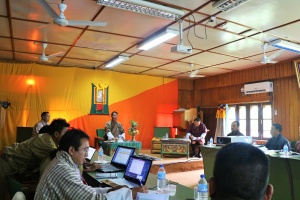